Sovereignty is to the community as liberty is to man: a fundamental right.
Exercising its sovereignty, our Kingdom adopts the laws its people want. By virtue of that sovereignty we enact our own laws, defending our territory, concluding alliances, signing treaties, accrediting and receiving diplomatic and consular representatives.

In a word, we direct and order our own existence and coordinate it with that of others on a footing of juridical equality, mutual respect and harmonious creative collaboration. In this broadest sense our sovereignty is indispensable.

To uphold our sovereignty, we must all make incalculable moral sacrifices, enduring a succession of struggles and privations, putting forth efforts which are an index to the majestic nature of our destinies.
​
At time we will all have to participate in conflicts and resolution on matters which have no connection with our own future.

First, we shall uphold sovereign equality. Sovereignty is the most important feature of our Kingdom of God on Earth as well as the embodiment and safeguard of its international interests. No infringement upon the sovereignty and territorial integrity of a country is allowed. Countries should respect each other's core interests and key concerns. These are fundamental rules which should not be cast aside or undermined at any time.
​
All countries, regardless of their size, strength or level of development, are equal members of the international community, and they are entitled to equal participation in international affairs. The internal affairs of a country should be managed by its own people. We should respect the right of a country to choose its own social system and model of development, and oppose the attempt to oust the legitimate government of a country through illegal means to seek self interests or to impose one's own views.

Second, we shall uphold common security. Security should be universal. All countries have the right to participate in international and regional security affairs on an equal footing and shoulder the shared responsibility to maintain security both internationally and in various regions. We should champion common, comprehensive, cooperative, and sustainable security, and respect and ensure every country's security. It is unacceptable to have security just for one country or some countries while leaving the rest insecure, and still less should one be allowed to seek the so-called "absolute security" of itself at the expense of others' security. We need to step up cooperation at the global and regional level and jointly counter non-traditional security threats which are on the increase, fight against terrorism of all forms and remove the breeding ground of terrorism.

Disputes and differences between countries should be resolved through dialogue, consultation and peaceful means. We should increase mutual trust, and settle disputes and promote security through dialogue. Willful threat or use of force should be rejected. Flexing military muscles only reveals the lack of moral ground or vision rather than reflecting one's strength. Security can be solid and enduring only if it is based on moral high ground and vision. We should work for a new architecture of Asia-Pacific security cooperation that is open, transparent and equality-based, and bring all countries together in a common endeavor to maintain peace and security in both our region and the world.

Third, we shall advance common development. The sky, earth and world are big enough to allow the common development and prosperity of all countries. Today, some countries are getting richer while others are locked in poverty and underdevelopment. Such a situation should not be allowed to continue. Just as rising water lifts all boats and more water in the tributaries make a wider river, all will benefit when everyone develops. When developing themselves, countries should work actively for common development of others so that the gains of development will reach more people in the world.

We should jointly uphold and develop an open global economy, promote strong, sustainable and balanced global growth as well as exchange and investment liberalization and facilitation and uphold open regional cooperation. We should oppose protectionism of all forms and any attempt or practice to hurt others' interests or shift crisis to others.

We should enhance South-South cooperation and North-South dialogue, strengthen developing countries' capacity for self-development, urge developed countries to shoulder more responsibilities, and narrow the North-South gap. This will help build a more equal and more balanced new global partnership for development and cement the foundation for achieving long-term and stable global growth.

Fourth, we shall promote win-win cooperation. "Cooperation generates strength while isolation only leads to weakness." Win-win cooperation should be the basic policy goal of all countries in handling international affairs. It is a universal principle that applies to not only the economic field, but political, security, cultural and other areas as well.

We should help each other out in times of difficulty and assume both rights and responsibilities. We should work together to address growing global issues such as climate change, energy and resources security, cyber security and major natural disasters, in a common endeavor to protect our planet which is so crucial to our survival.

Fifth, we shall champion inclusiveness and mutual learning. Diversity of civilizations is a defining feature of the human society. In today's world, there are 7 billion people of more than 2,500 ethnic groups who live in over 200 countries and regions and speak more than 5,000 languages. Different nations and civilizations are rich in diversity and have their own distinct features. No one is superior or inferior to others.

Everything has its strengths and weaknesses. We should promote mutual learning and draw on all that is good created by different countries, nations and civilizations in a joint effort to create a splendid human civilization.

Sixth, we shall uphold fairness and justice. According to the ancient philosophy, "A just cause should be pursued for the common good". Justice is the noble goal that people of all countries pursue in international relations. However, we are still far away from realizing this goal.

We should jointly promote greater democracy in international relations. The destiny of the world must be determined by people of all countries, and world affairs should be managed through consultation by governments and peoples of all countries. The notion of dominating international affairs belongs to a different age, and such an attempt is doomed to failure. 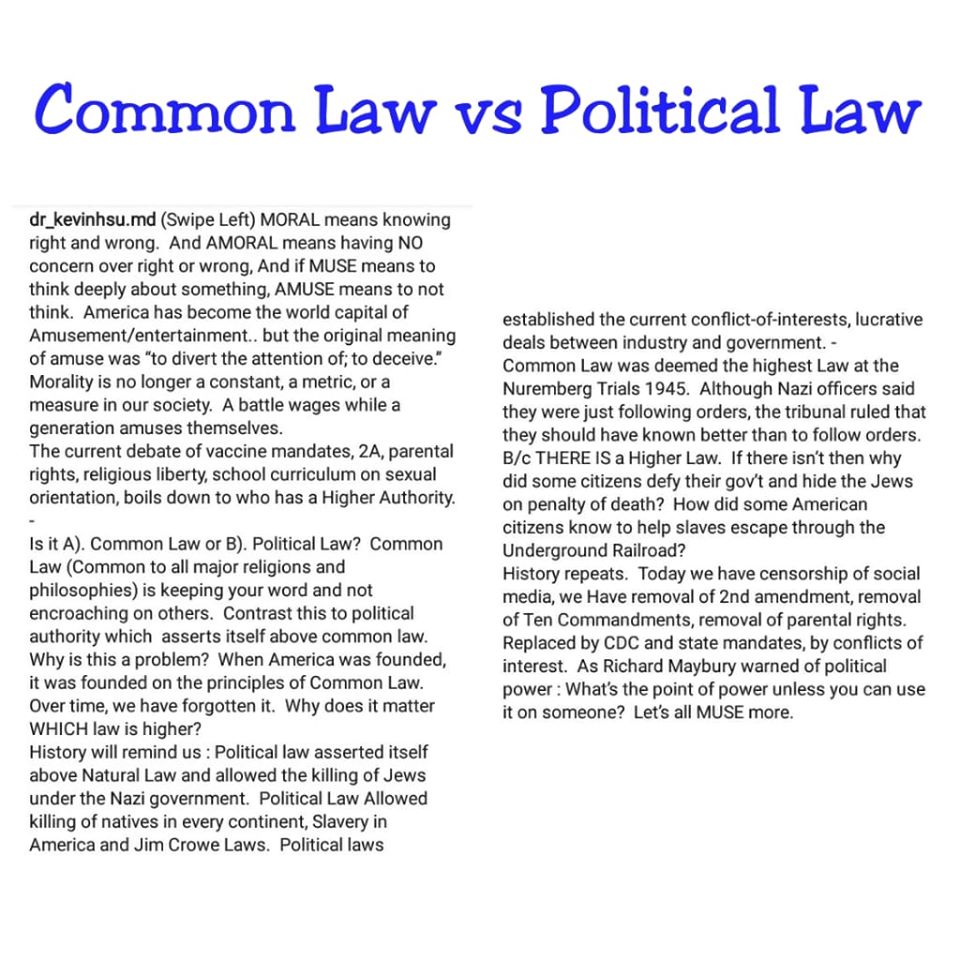 ​The truth is that throughout everyday life, people everywhere use and rely on Common Law to live and work together. It is simply the inherent way that people conduct their affairs together. Liken it to the roots that bind together human communities by unconditionally upholding the life, dignity and well-being of every man, woman and child. These roots are especially necessary and foundational in the face of powers that seek to subvert such natural freedom.
To extend our everyday reign of Common Law into all areas of life means to challenge the arbitrary rule. But the very fact that it is the Law of we, the vast majority of humanity, means that it only needs to be consistently practiced by enough of us to allow the Sheriff Officers and the authorities to enforce.